Occurrence policies protect you from any covered incident the “occurs” during the policy period, regardless of when the claim is reported or filed.  An occurrence policy will respond to claims that come in – even after the policy has been canceled – so long as the incident occurred during the period in which coverage was in force.

Occurrence limits “restore” each year so that claims paid for incidents arising from one policy year do not deplete limits available to cover claims from other years.  Each year an Occurrence policy is in force represents a separate set of limits.  Ten years of coverage under a $1M/$3M Occurrence policy could provide the insured protection for up to $30M in claims (ten year combined annual aggregate limit).

Claims-Made forms provide coverage for claims that you report during the active policy period, or an extended reporting period, and after a retroactive date.  Claims made policies provide coverage so long as the insured continues to pay premiums for the initial policy and any subsequent renewals.  Each succeeding year the policy is continuously renewed, the “coverage period” is extended.  Once premiums stop the coverage stops.  Claims made to the insurance company after the coverage period ends will not be covered, even if the alleged incident occurred while the policy was in force.

A claims-made policy will ONLY cover claims after the coverage period if the insured purchases an extended reporting period, commonly referred to as “Tail” coverage.

Because both the incident and the claim have to be filed during the coverage period, the Claims-made insurer has little risk of loss the FIRST year a new policy is in force.  That is why the first year premium for Claims-made coverage is lower.  Each year the policy continuously renews, the coverage period expands, and the insurance company’s exposure to loss increases.  For the first four years a Claims-made policy is in force, the premiums increase incrementally to reflect this increased risk. This process is known as the “Claims-made step factor.” 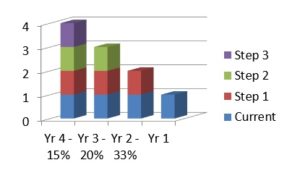 Tail coverage is a provision found within a claims-made policy that permits an insured to report claims that are made against the insured after a policy has expired or been canceled, if the wrongful act that gave rise to the claim took place during the expired/canceled policy.

Tail coverage requires that the insured pay additional premium usually roughly based on a percentage of previous term’s annual premium.

Are you ready to save time, aggravation, and money? The team at Dumbaugh Insurance is here and ready to make the process as painless as possible. We look forward to meeting you!